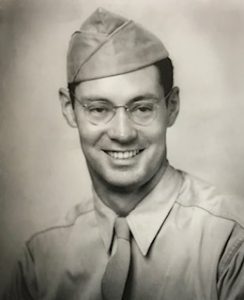 Edward Ucinski Sr. was born in St. Louis, Missouri on January 11th, 1914 and was a first-generation American. His parents immigrated from Europe (Poland or Russia depending on what war was going on at the time). Ed Sr. had one older sister and one-half brother, who died rather young. My great-grandfather, Franciszek Ucinski, would pass when my grandfather was six years old. My grandfather did not really get to know him. As a result of the untimely passing, my grandfather would have to help support his mother and sister and worked full time at a young age. He was a self-educated man who bettered himself without a formal education.

On June 22nd, 1940, my grandfather married Lillian E. Weisel. My father, Edward Jr. was born on October 23rd, 1942. My grandfather was when then drafted in 1943, while my grandmother was pregnant with her second son, Michael Ucinski. My grandfather left before he was born and did not get to see him until he was almost two years old.

As for his military service, surprisingly enough, he never talked about it, ever. This was very common for those who had experienced what he did. What I did know, was what was told to me by other family members. It was my grandmother who told me about my grandfather’s POW status and he would not comment on it. Like I said, he would not talk about it.

My grandfather made one exception for me. Back in 1990, I was doing a high school project and one of the options for a project was to interview a veteran. Of course, I immediately thought of my grandfather. After speaking with my teacher, he gave me some advice and requested that I record the conversation, which I did. I still have it today and my son has expressed an interest in hearing it. He told me things that I never knew and then never mentioned them again.

While in the military, my grandfather was a BAR gunner assigned to the 9th Infantry Division, Company K, 39th Infantry Regiment. He landed at Omaha Beach in Normandy, which was after the beach had been regained by the Allies. He would later see his first combat shortly thereafter. He participated in several firefights and would later fight in the Ardennes Counter Offensive in Bastogne. This is where he would be captured. He told me that he was one of three survivors, which included a second platoon in the neighboring area, which he informed me that “all of them were “gone” when they were taken past their positions.

From there, my grandfather was transported by train to Stalag VII-A in Moosberg. He remained in captivity where he was infected with lice and had other illnesses. He was used as a laborer in areas damaged by airstrikes and other combat related missions. My grandfather was then liberated on Easter Sunday 1945 by Allied Forces under the command of General George S. Patton, who he saw ridding on the back of his tank. He distinctly remembered seeing Patton’s pearl handle pistols. From there, my grandfather returned to Allied control where he had much rehabilitation.

Like many former G.I.s of his time, my grandfather returned home and wanted to put the experiences behind him and just live his life. Be packet up his uniform in a box, where it remained in storage. I have that uniform today and it is something of his that holds real value to me.

My grandfather’s story with the American Legion began on October 14th, 1949 in St. Louis, Missouri. He joined Missouri Post 472 in St. Louis City and eventually became the Post Commander in 1951. I do not know exactly what happened with the post, but I know that it is no longer in existence. My grandfather would the join Missouri 302 and would also become the commander in 1968. He was a member of that post until he died in 1998. Shortly thereafter, the post was closed.

I completed a military records check in the spring of 2019 to see what I could find out what was in his military records. When I received the response letter in August 2019, I was in disbelief. Previously, I had a records technician call me in reference to my request. He made no mention of the Bronze Star, but did have other information for me. He began by informing me that my grandfather’s records were destroyed in the fire of 1973. I was informed that there was no useful information that could be sent, other than the awards, which were at another location. I was then informed that my grandfather went to the National Personnel Records Center in 1988. I was also informed that he signed an affidavit that he (my grandfather) was a combat infantryman in Northern France in 1944 and that he was later taken prisoner at the Bulge.

All of this transpired after my grandfather received a letter informing him that he was eligible to receive the Prisoner of War Medal, which had just been legislated into law in 1985. I have a copy of the letter in my possession, dated September of 1987. I still remember him asking me if he should go and receive it. I of course said “yes”. Even at the young age of 13, I thought that this was something important and something that he rightfully earned. Was this the catalyst for his Bonze Star? I do not know. But what I do know is how his eligibility was established.

In addition to the awards listed on the sheet from the Records Center, a second sheet was attached. It was a letter explaining that the Bronze Star was awarded to my grandfather after the end of the Second World War. This was part of an initiative started by General George C. Marshall, which did take place after the war ended. Apparently, General Marshall was concerned that the Army Infantry and the Combat Medics were not properly represented in the awards process. Many were not recognized in the awards process at all. The infantry had the highest losses and the fewest awards. General Marshall’s initiative made it possible, retroactively, for anyone soldier who earned a Combat Infantry Badge or a Combat Medic Badge to be awarded the Bronze Star without citation. It was something truly incredible that many do not know about.

I hope that this information helps. Please feel free to contact me at any time. I would gladly like to tell you about the American Legion Post that we are starting in the Tenth District of Missouri. It will be Post 302, the Edward F. Ucinski, Sr Memorial Post. But that is a different story for another time. I look forward to hearing from you in the near future.